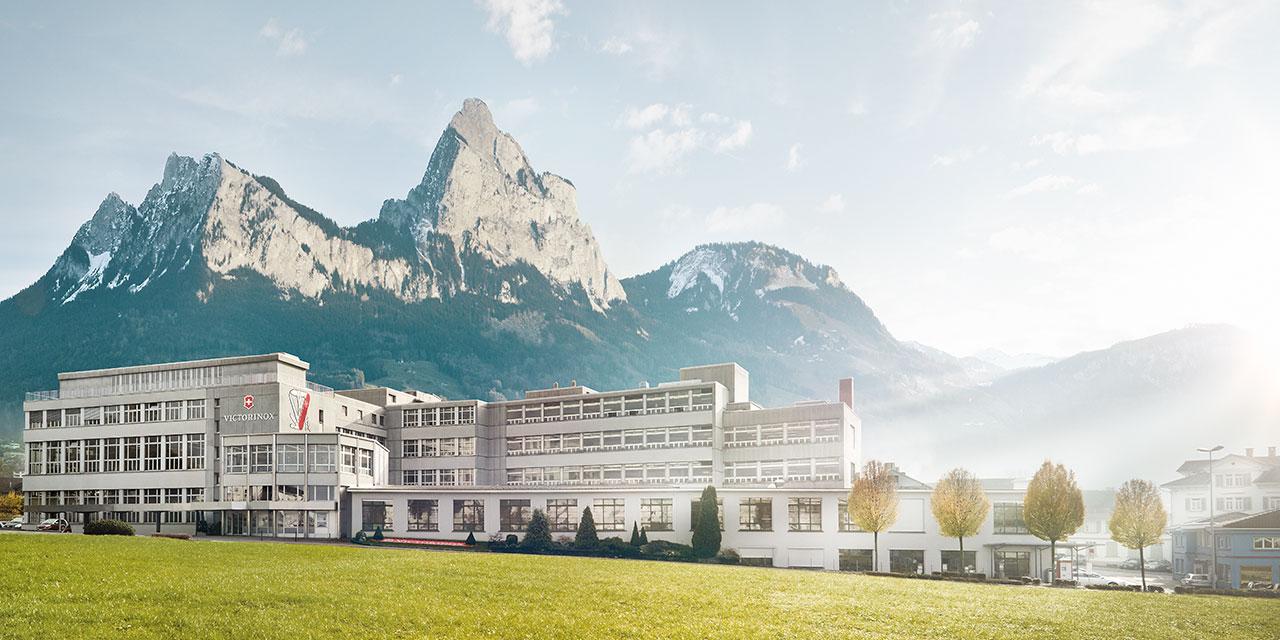 Sustainability is part of Victorinox’s DNA

The issues of environmental protection and sustainability have been a high priority at Victorinox for many years. Both at our own production centers as well as for our suppliers, this family company is vigilant about the sparing and efficient use of resources, as well as environmentally friendly production.

As early as the 1970s – at a time when hardly any statutory regulations existed for industry at a national level – Victorinox recognized that protecting the environment and ensuring sustainability were not just part of their duty as a business, but also an important factor for success. Today, the company’s innovative products and professional implementation of environmental and energy management reflect the long-term strategy of this family enterprise.
The fact that the company’s management also assigns particular importance to concerns about resources and preserving the livelihood of future generations is also demonstrated by the company prize from the Schweizerische Umweltstiftung [Swiss Environmental Foundation], received in 2008. Since 2007, our own «Green Shield» label has been helping to make all employees aware of our environmental protection concerns. 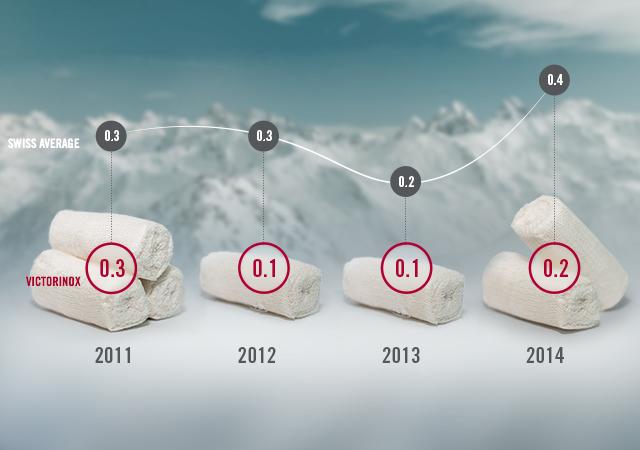 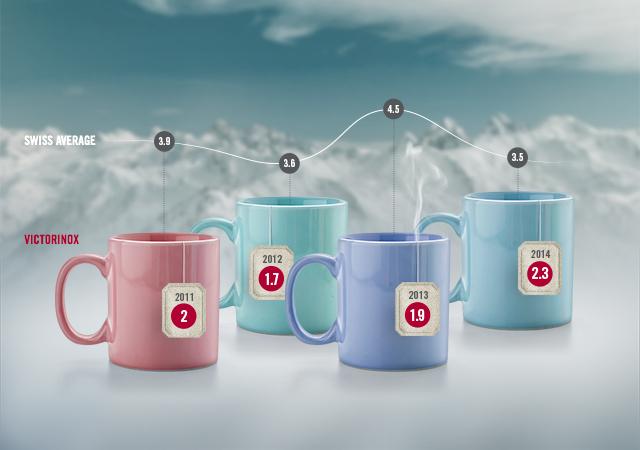 We also give our corporate culture credit for the low number of sick days.

Heating oil is now used only in emergencies

Victorinox pays special attention to the low consumption of heating oil, energy, and water. In particular, the ongoing optimization of our machinery helps to lower our energy consumption. For example, a ventilation system that went into operation in 1980 at our production site in Ibach now functions with 50% less operating power than at its original installation. Victorinox is also contributing to climate protection by means of heat recovery: the waste heat from production facilities provides up to 75% of the heat for all of the operational buildings at the headquarters’ location and for 120 apartments owned by the company.

Thanks to this intensive use of waste heat and the ongoing renovation of our buildings, the company reduced its demand for heating oil from over 30,’000 liters in 2014 to an average of 2,500 liters per year. In fact, since 2015, heating oil is now only being used in emergencies or in case of a water pump failure. Due to closed-circuit circulation systems, we’ve been able to more than halve the quantity of fresh water needed to cool erosion and cleaning facilities. We also use rain water for the toilet facilities at several production centers. 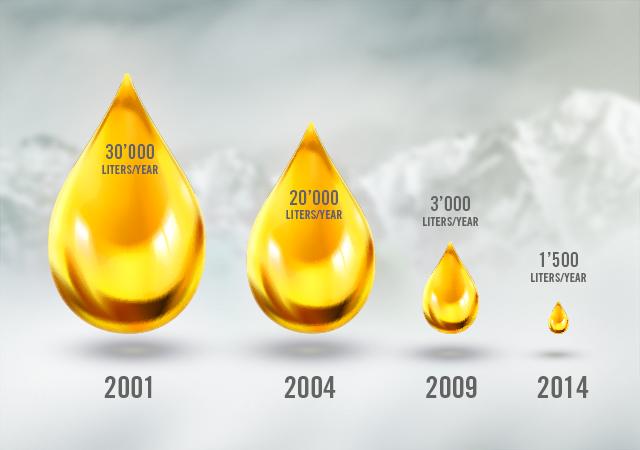 Overview reduction of heating oil at the Ibach production site 2015

We were able to massively reduce the use of heating oil in recent years. A major contribution here comes from the recovery of heat from waste heat in production facilities.

At Victorinox, the maxim “separate instead of burning – maintain instead of disposing” is applied across the company. An integrated waste disposal plan for solid and liquid waste involves all employees in the recycling of resources and reduction of waste. Thanks to our in-house collection stations, we are now able to send 55% of our total waste for recycling. From production, substantial quantities of plastic and steel waste as well as grinding sludge are recycled, which results in the generation of significantly less industrial waste. Last but not least, thanks to careful maintenance and constant modernization, Victorinox’s production machinery has a very long lifespan – some of the machinery has already been in operation for 50 years.

Victorinox resolutely complies with and implements laws and regulations regarding water protection, air purification and the handling of chemicals and hazardous materials. Wherever possible, production does not use chlorinated hydrocarbons. By various measures, such as switching to water-based and CHC-free cleaning systems, we were able to reduce their consumption from 108,000 kg to 236 kg per year, which is far below the legal limit. Waste water from production is pretreated in the internal cleaning system prior to being discharged into the municipal wastewater treatment system.

Sustainability is a priority in development and manufacturing

For the development and manufacturing of all products, Victorinox sets the highest standards for compliance with environmental criteria. We assess a range of factors from recyclability and environmental threats, to the health risks from our materials and packaging (eg the limited use of heavy metals) and energy consumption for manufacturing and transportation. We look not only at our own internal production, but also expect the same high standards from our suppliers, who are regularly checked by our team. Following the principle of “as much as necessary – as little as possible,” all packaging used for product protection is recyclable – our cardboard packaging consists of up to 90% recovered paper. Only 100% chlorine-free bleached paper and solvent-free inks and finishes are used.

Along with their excellent quality, Victorinox’s pocket knives are characterized by their proven longevity, unlimited reparability, and sparing use of material. The Victorinox AG guarantee covers all material and manufacturing flaws for an unlimited period (except for two years for electronics). Damage caused by normal wear or improper use is not covered by the guarantee. 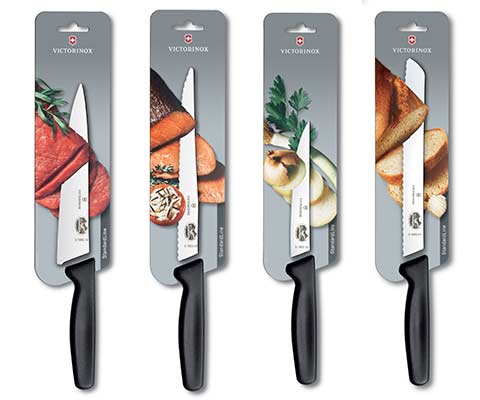 On both large scale and small – a continual process of improvement

Victorinox is not yet satisfied with what we have already accomplished. Our family company focuses on a continual process of improvement that is firmly anchored in our corporate culture. Our intention is therefore to further improve energy efficiency and with this in mind, we installed a photovoltaic system on our factory building in Ibach in April 2016, which has been producing power for the company’s own use. We also have plans to further develop the heat recovery system, to expand the district heating for residential housing, and to renovate existing building structures.

The buildings in Delémont are also being totally renovated and brought up to date in terms of energy technology. The 2,495 m² of solar panels produce approximately 470,000 kWh per year. This is equivalent to the power demand of approximately 135 households. CO2 emissions were reduced by approximately 400 tons by switching from heating oil to a heat pump. But we also help individual employees do their part: Victorinox not only reimburses the costs for using public transportation to get to work but also plans to set up a charging station for electric vehicles on the Ibach site. 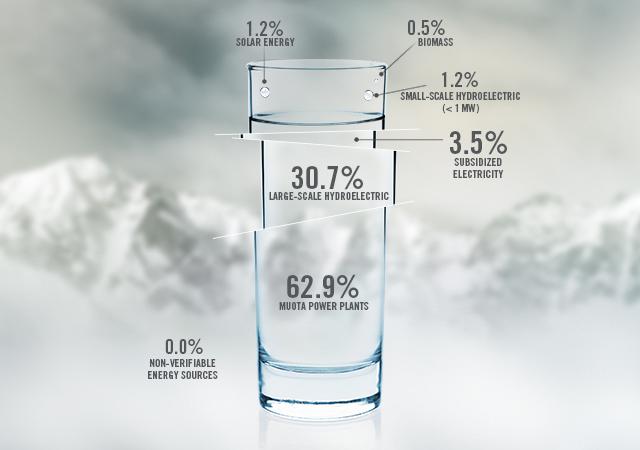 Overview of energy sources at the Ibach production site 2015

Victorinox advocates sustainably produced electricity; therefore, all electricity is drawn from regional electricity producers who generate the electricity with their own hydroelectric power plants in our mountainous region.